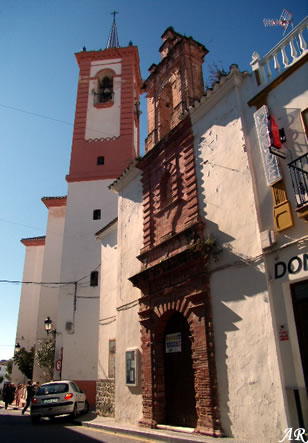 The Valdenebro Chapel & House is located in the town center of Cortes de la Frontera, in C/ Real,

According to the inscription on the facade of the house, both chapel and house were built in 1760. For the chapel the mudejar-baroque style was followed, although only the brick façade has survived to modern times, with a vaulted niche and belfry in its upper part.

The house, which is also known as the Casa de las Tetitas(Literally, House of the Little Tits) because of the strange shape of the metal rivets on the front door, is situated just in front of the chapel and was joined to it by an underground passage, which is now blocked.

They belonged to the Valdenebro family, whose most important member was José Serrano Valdenebro (1743-1814), a naval officer who was named Commander in Chief of Troops and Guerrilla bands in the Serranía de Ronda, a small people’s army that was organised in response to the Napoleonic invasion during he peninsular War, ( War of Spanish Independence). (1808-1814).