Torrox is situated in southern Spain on the Costa del Sol East, 44 kilometres from Malaga airport and less than 10 km from the village of Nerja and its famous cave. Access is quick and easy via the Autovia Mediterraneo towards Motril – Almeria if you come from the western Costa del Sol or from Malaga.

The village is situated at 145 metres above the sea level. The average rainfall in the municipality is 530 l/m2 and the average annual temperature is 19 º C

His name seems to come from Arabic “Turrux”, meaning tower, but its origin long before Mohammedan invasion.

On the right bank of the river mouth Torrox, just around the lighthouse, was found a Roman factory-city that had its heyday in the I-IV centuries and is believed to be the one that gives rise to primitive people.

Prior to the Romans, the Phoenicians settled in these parts as in other points of the Malaga coast, as witnessed by few reserarchers have investigated its presence in Spain. The discovery of this factory-Roman city, whose name was allegedly Claviclum is due to the lighthouse torroxeño Tomas García Ruiz.

The Romans developed the canning industry of fish, the famous garum that was exported to Rome, where he was so appreciated. But the town of Torrox, especilally the Mozarabic (native population not integrated in the Mohammedan religion), was unhappy. This discomfort join him in the late ninth century, the uprising known historically as the Mozarabic, who led Omar Ben Hafsun against the Caliphate of Córdoba. The Caliph Abd el-Rahman III laid siege to the castle on Torrox in 914, defeated and captured all the rebels and burned the ships that visited the coast in aid of the besieged. The chronicles say that those who died in the assault on the castle were beheaded and their heads sent to Córdoba. Torrox was so depopulated.

Ibn abi-Amir Mohammad, named himself as Almanzor, was the last great leader and the largest Andalusian his military victories. Hi was born in 942 in Torrox, in the family of the Beni yeremita abi-Amir, of the tribe Moafir, one of the few Arabs who came in with the Berbers in Tarik in 711 and took the first city of Visigothic Spain, Carteya.

After beating Galib in his struggle for power, go to Cordoba and is where named Almanzor, and establishes a dictatorship. In his last fight, against Castile, is attacked in Cervera, near Calatañazor. Ridden in a car is brought to Medinaceli, where he died in 1002.

In the eleventh century there arose a completely Muslim population depended on taha Frigiliana. During the Nazarite, fourteenth and fifteenth centuries, is felt their influence on the activity they bring to the silk industry, wich spread throughtout the region and promoted the planting of mulberry trees. Torrox becomes the slik collection center, once developed, attended export demand and markets of Malaga and Granada wich was greatly appreciated. The Nazarites also encouraged the production of nuts and sugar cane, coming into existence of the latter three grinders in the term.

Torrox was conquered by the Catholic Monarchs on April 29, 1487, after the capture o Velez-Malaga, but the victory was not consolidated until the followng year. Torrox, near Nerja, was reconquered by El Zagal a year later in what may be regarded as a feat ephemeral. The Christian troops regained the town almost inmediatly.

The Catholic Monarchs granted the title of Very noble and very loyal to Torrox village and in 1503 a royal decree of Elizabeth I authorized the construction of a tower in his term to protect the coast from attacks by pirates. As in the other villages of the Axarquia, Torrox suffered from the rebellion of the Moors, the expulsion of these and the following afforestation, and the effects of the yelllow fever epidemic that hit Malaga in the early nineteenth century and the ravages of the Napoleonic invasion, whosetroops used the Arabic castle fort and thn blew up during removal. Two successive earthquakes that devastated the region in the late 1884 and early 1885, whose epecenter was located in Zafarraya sales, caused damage to the municipality of Torrox. In the town that, according to withnesses of the disaster have been passed, the waters of the sea level dropped and fishermen watched as the fish fled to sea. During the 10th to January 20, 1985, 5. M. Alfonso XII visited the affected area. The night before his departure, on 19 January fo that year, he stayed in Torrox, in the current home of the Hoya.

“Migas” are the most popular and characteristic dish in the municipality of Torrox. Its ingredients are as simple as they are basic: flour, garlic, olive oil, cracklings, bacon, and the preparer’s know-how. From such simplicity comes a truly exquisite dish that is accompanied by the no less famous ensalada arriera (a salad made of codfish, olives, onions, tart oranges and olive oil).

On Autovia Mediterraneo (A-7 or N-340), along the stretch between Vélez Málaga and Nerja, the turnoff to Torrox is clearly signposted, reached directly without any other turnoffs.

It is located where the Calle Alta and Calle Baja meet. The place is known as the “Puerta Del Sol”. It is a passage that leads to small and winding streets in the Arab style.

During the 90s it was covered with bricks and is a part of the “Almanzor route”. 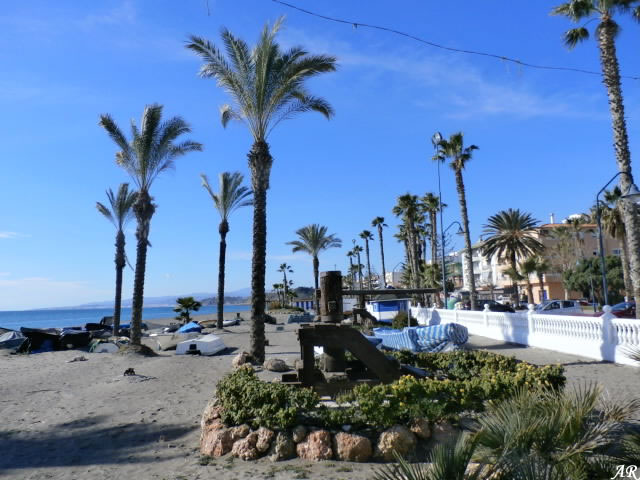